The natural environment and the rich landscape and environment of Collado Mediano are the greatest assets of the region. With its privileged situation in the centre of the Sierra de Guadarrama, in the north-western part of the Madrid Region, between the elevations that constitute the progressive descent of the main line of peaks of the Sierra de Guadarrama and the alignment of the Sierra de Hoyo. Peña Rubia, Cabeza Mediana and Sierra del Castillo preside over the higher part of the municipality, at the foot of which is the natural rocky monument known as La Cobañera.

In the lower part of the village we find grazed areas, rich in ancient ash, oak and holm oak, dotted with cork oak. All this creates a very rich and varied environment, which is the greatest treasure and an authentic mark of the identity of Collado Mediano.

The most frequent trees in the meadow of Collado are the ash trees, as in many other places of the south slope of the Guadarrama. It is usually found in places with a certain humidity in the soil. Together with other pastures, the communal pasture is located in the lowest part of the village.

Pyrenean oaks, more abundant in the past, are frequent in the meadows, and together with the holm oak and some isolated of cork oak specimens (common centuries ago) are the most important elements.

The holm oak is less demanding of moisture than the others, but when it grows in dry, shallow soils and is poorly tended, it has a stunted growth habit. The holm oak can be seen on the rocky slopes of Cerro del Castillo, while ash trees can be found in the valleys that extend to the foot of the castle, as they are more demanding in terms of water.

In the Middle Ages the forests must have occupied large areas on the slopes of the Sierra de Guadarrama. In the 14th century, Alfonso XI, in the book of La Montería, mentions the cork oaks of Collado Mediano, of which today there are only a few isolated specimens. In the 18th century, King Philip V authorised the council of Collado Villalba to “cut and thin out up to 30,000 arrobas of charcoal from its own forest”. This gives an idea of the size and quantity of this forest. During that century and the following the forests of the zone are constantly being transformed and replaced by pastures and farmlands.

Cerro del Castillo, the backdrop to the village, did not escape this process. A few centuries ago it probably offered an image dominated by the forest, in which gall oaks and oaks abounded on the northern slope and oaks and junipers in the south.

Testimonies from the beginning of the century, however, tell us that the hill was completely bare. The crops covered the slopes of the hillsides, numerous herds grazed regularly on it, and people collected the shrubs almost before they had come out of the ground. This situation lasted until after the Spanish Civil War.

Around 1940 the current pine forests were repopulated. Two species of pines were planted: black or cluster pine, and wild, Valsaín or Scots pine. The black pine was planted in the lower parts and in the sunny areas, that is to say, in the driest zones. Now the pines have grown, the hill looks different from half a century ago and is home to other animals. 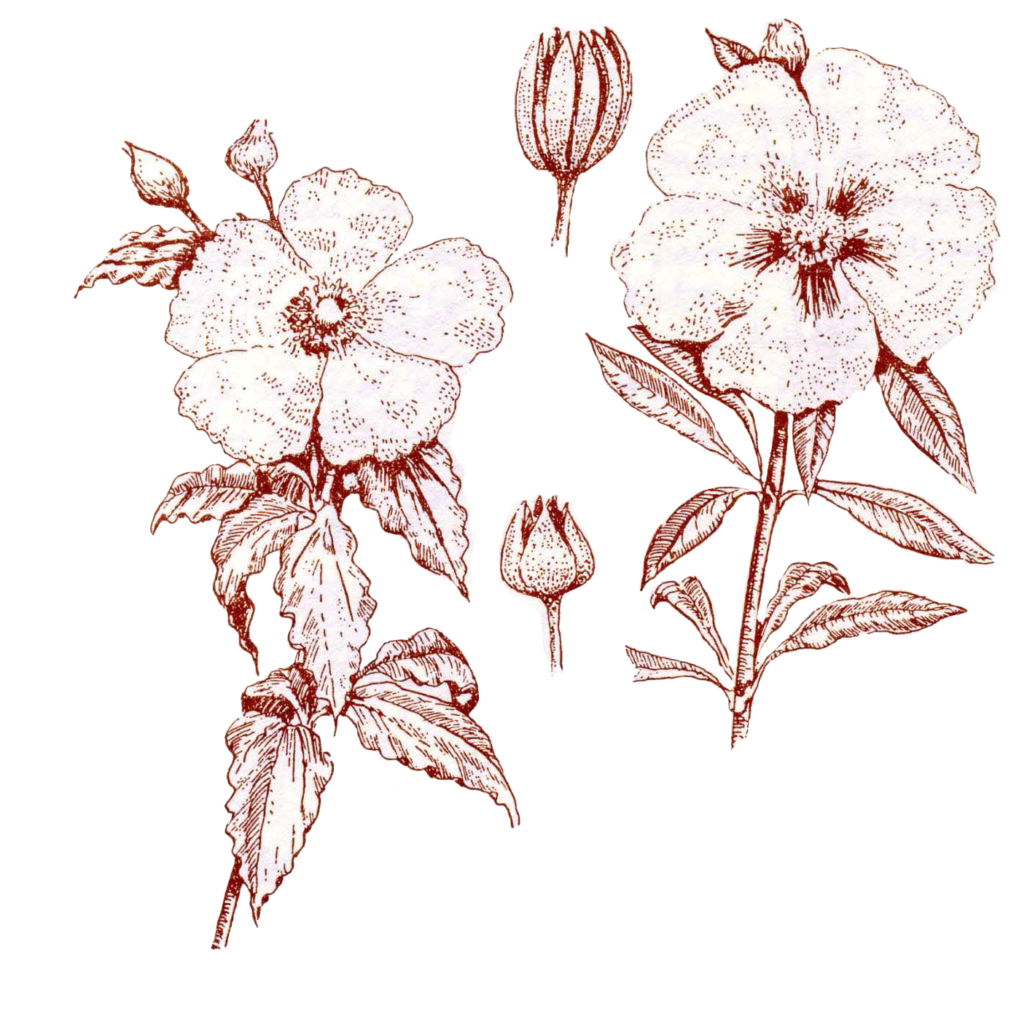 In Cerro del Castillo there are two types of rockrose: gum and laurel leaf. The first grows in low-lying sunny areas where the ground has less humidity. The laurel leaf rockrose grows in high shady areas.

Of the tree species in the natural forest, only a few specimens of holm oak and juniper remain, i.e. those that best resist the current conditions of drought and soil erosion.

The spontaneous plants in the area emerge under the repopulated pine forest: rockroses and other bushes, holm oaks, junipers, etc. With the disappearance of livestock and gatherers of firewood, the stands of shrubs and tall herbaceous plants such as feather grass increases.

Although not very abundant, it is possible to see roe deer in the Cerro del Castillo. In recent years they have spread from the pine forests of Valsaín where they have their densest presence. Since the 1960s the wild boar has also made an appearance. They are frequently found in the meadows where they look for bulbs and roots. The fox is also present in the area of Collado Mediano.

Certain birds of prey have successfully withstood their unjustified and continuing persecution at the hand of man. Most of them have withdrawn their nests to less frequented areas using the rest of the territory as a hunting area. It is currently punishable by law to kill or capture these animals.

The buzzard is a very useful bird of prey due to its large consumption of harmful rodents. It is common to see them gliding from Cerro del Castillo and hear their cries resembling meows.

Kites can also be seen gliding in search of small prey. In spring and summer you can also see booted eagles looking tirelessly for rabbits and other prey to feed their chicks.

Another small predator of our fields is the shrike, which impales its prey on the thorns of brambles and then eats them.

From Cerro del Castillo it is not uncommon to see other birds of prey in flight, such as golden eagles and short-toed snake eagles.

The silhouette of the griffon vulture is still commonly seen, and more rarely, the black vulture. The causes of this decline are due to the reduced abundance of corpses of large animals, caused by the practical disappearance of the numerous cattle that grazed there.

Quite a few birds, such as finches, scribes, wheatears, blue tits, woodlarks, warblers, great tits, woodpeckers and others are abundant and easy to observe.

In spring and early summer, the hill of the castle allows the observation of different species of butterflies. There are about 50 diurnal species in Collado Mediano and a much larger number of nocturnal species. These and other insects feed on plants and flowers, and in turn are food for birds and other animals. 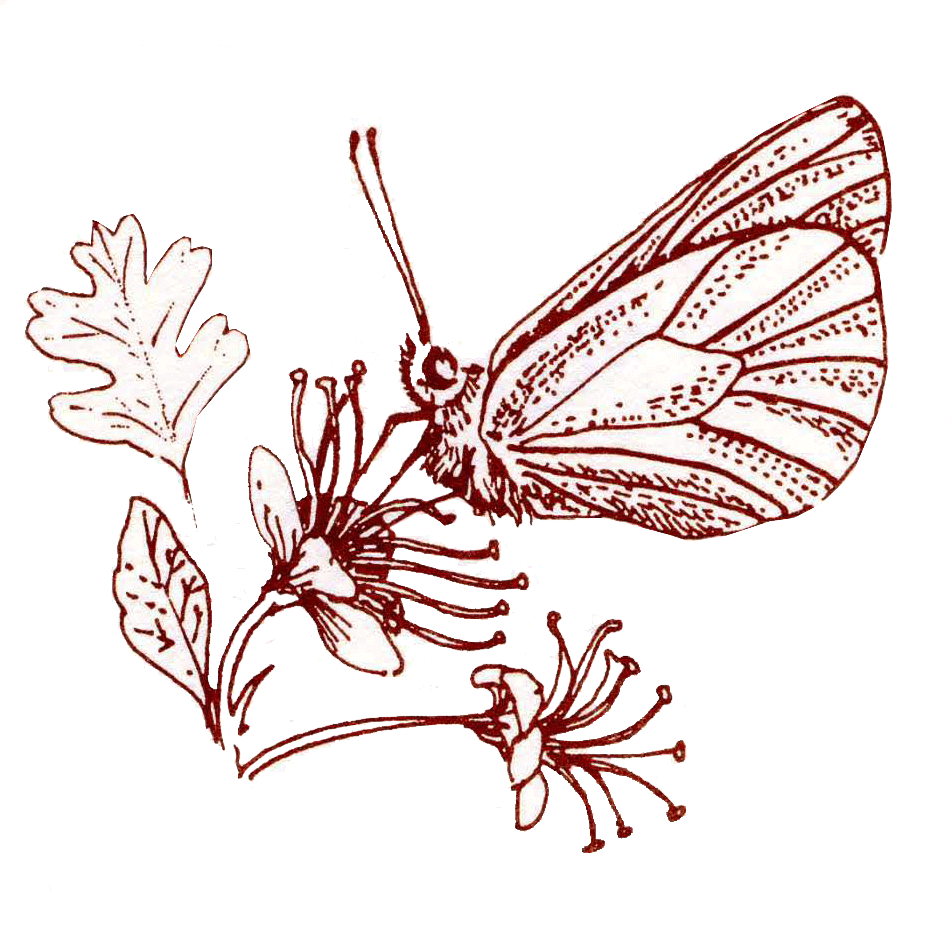 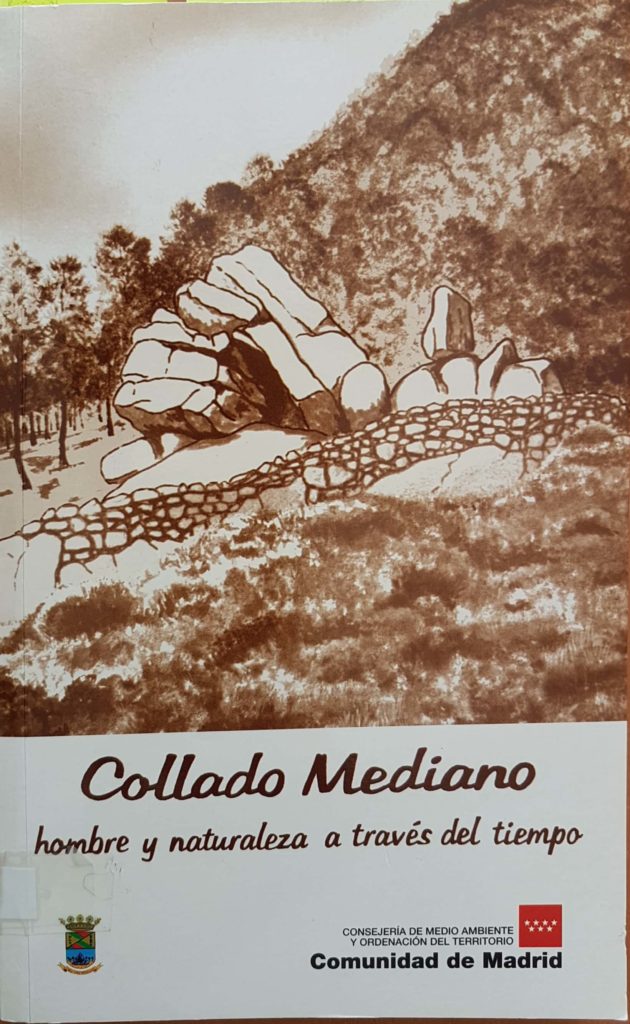 In 1982 this book by ecologist Fernando González Bernáldez, Cristina Herrero and Antonio Pou was published by the Department of Ecology of the Autonomous University of Madrid. This singular work of handwritten text and illustrations such as those shown on this page was republished in 2003 by the Town Council of Collado Mediano and the Madrid Region. This reference book is a genuine treasure for anyone who appreciates the environmental values of the mountains and our municipality.

The book is part of the UNESCO programme “Man and the Biosphere” aimed at research, conservation and education, to facilitate citizens’ understanding of their surroundings and environment. Work in Spain began in Madrid in December 1980, and at the proposal of the Provincial Council, Collado Mediano was chosen as the representative point in the Sierra del Guadarrama and of the influence that the city of Madrid exerts on it.

According to the authors, the intention of this work was to offer a book of dissemination in which there is room for both the practical experience individuals in the field and for other theoretical knowledge. The aim is to highlight the relationships between different ways of understanding and using the same space, in a not contradictory but complementary way.

Singular trees in the Madrid Region

Article 2 of Decree 18/1992, of 26 March, of the Governing Council, approving the Regional Catalogue of threatened species of wild Fauna and Flora and creating the category of Singular Trees, states: “flora specimens which, due to their extraordinary characteristics, rarity, excellent bearing, age, size, historical, cultural or scientific significance, constitute a heritage deserving of special protection by the Administration”. As they are living beings, these specimens grow and die, so the catalogue may differ from the one shown here, excluding some species and adding others. 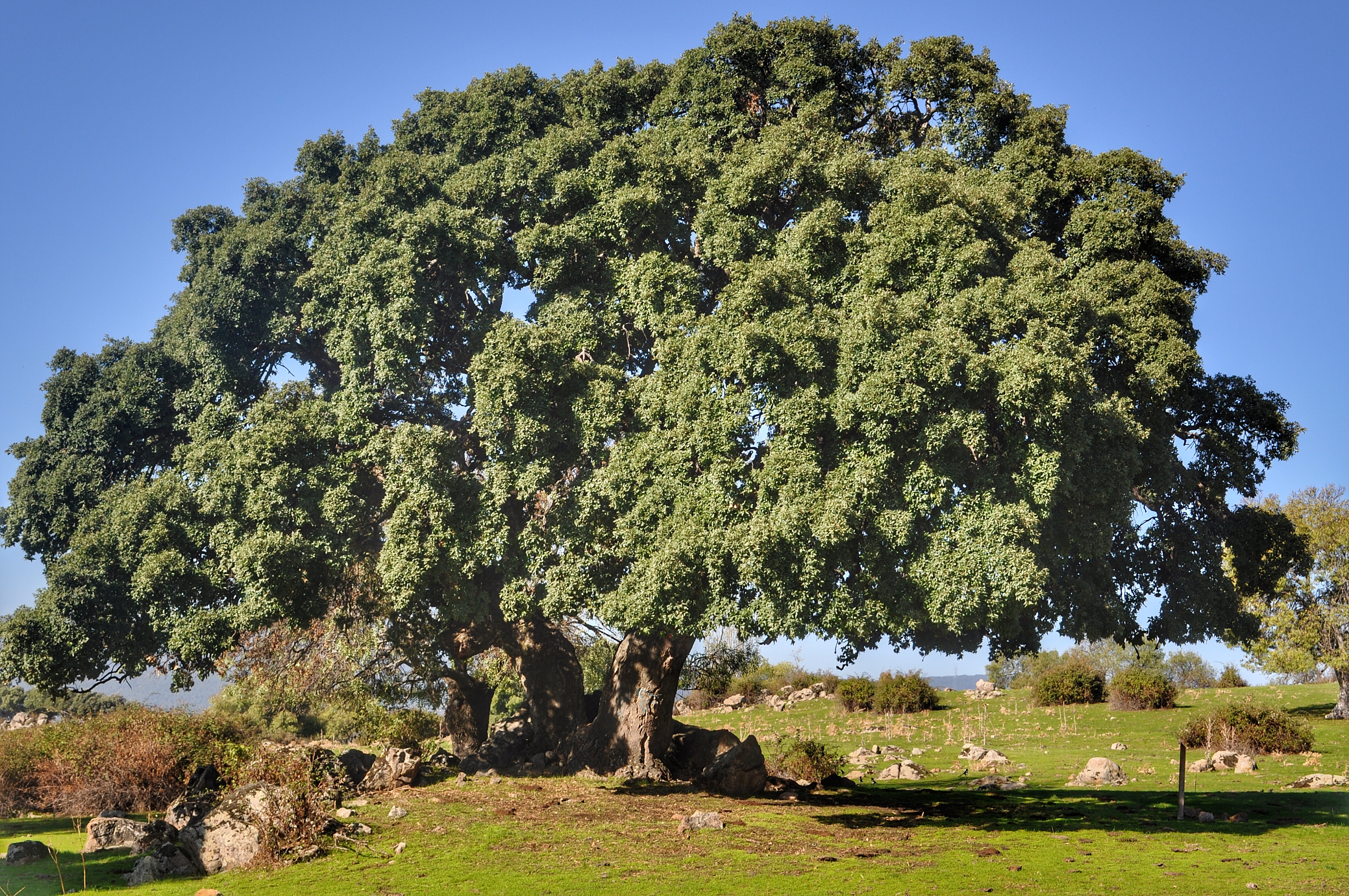 At Calle de la Jara no. 25 there is a basketball court, and in the stone wall there is a small door that gives access to the pasture. On the right, just over 100 metres away, is the cork oak tree on some rocks.

It is a rare species in the Madrid Region, usually appearing isolated at the foot of the mountains or forming small groups.

In front of the Casa de la Cultura, at the confluence of Avenida de Buenos Aires and Calle Real. It is located in a private garden, but is perfectly visible. It overlooks a public car park. 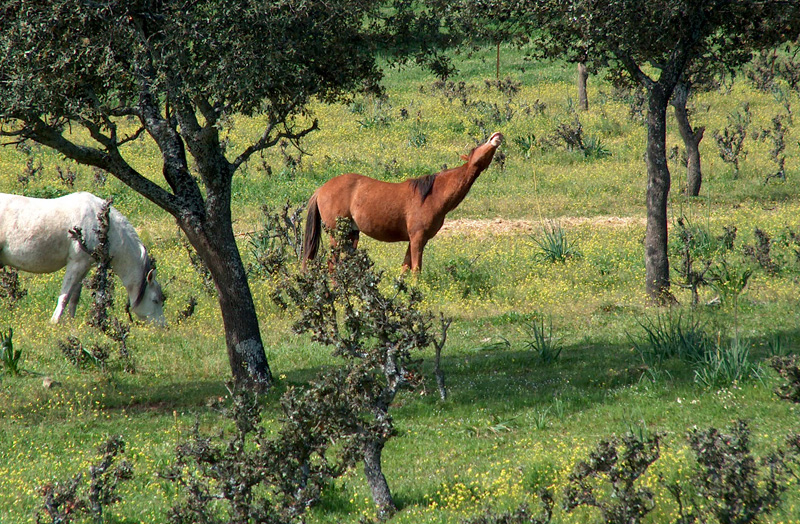 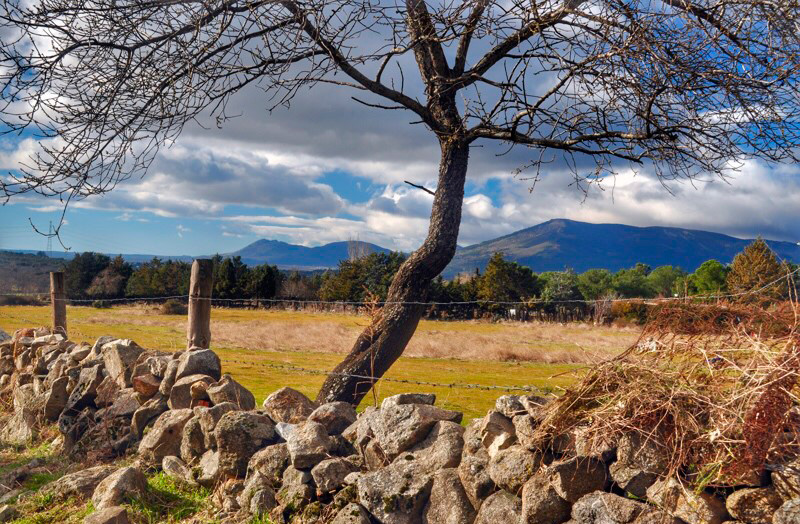 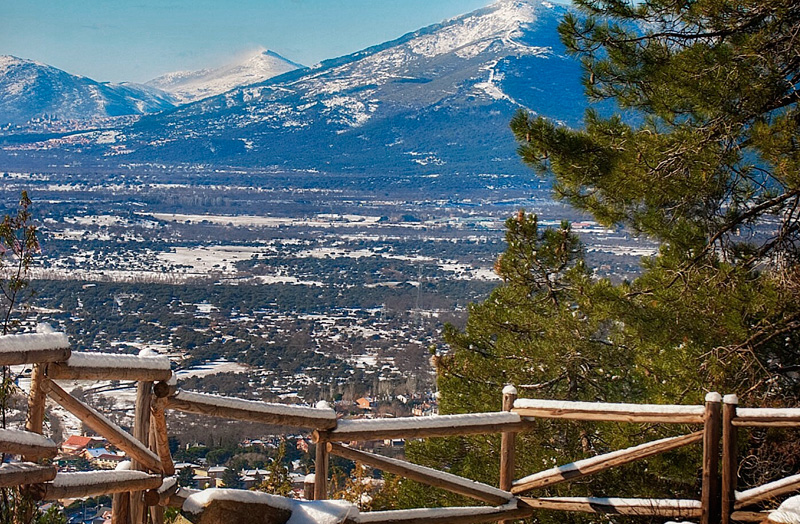